I’ve only heard 8 of the 29 tracks on Quinn Walker’s double-disc opus, but they’re so good I can’t imagine any album that features them failing to crack my top 20 for the 00s.  Walker is very much the wild card in this list, a prolific independent one-man band whose music embraces experimentation and humour, but never at the expense of depth.  The drum kit crashes, square synths wail and the guitars solos spin you right round, and above it all, Walker’s often falsetto voice weaves hilarious and unforgettable poetry.  All of these songs I know are to be savoured, but it’s ‘Save Your Love For Me’ that appears to be the quintessential Walker song – brilliantly unhinged, poetic and unforgettable.
Most representative track, and my favourite: ‘Save Your Love For Me’

14. The Avalanches – Since I Left You (Modular Recordings)

I’ll speak more about mashups later, but the great innovators in this field at the start of the 00s were Australian duo The Avalanches.  Since I Left You remains one of the most purely enjoyable records of the decade, one which just about anyone can throw on and enjoy however they wish – as a soundtrack for work, as a party or dancefloor staple, as a vehicle for reminiscing, whatever.  Chater once said the album was about “the idea of a guy following a girl around the world and always being one port behind”, and that wistfulness is tangible even amid the shining joy.
Most representative track: ‘Since I Left You’
My favourite: ‘Electricity’

To appreciate Sufjan Stevens, you have to get over how much of a pompous ass he appears to be.  Consider the title of track 14, a 20-second ambient hum: ‘A Conjunction of Drones Simulating the Way in Which Sufjan Stevens Has an Existential Crisis in the Great Godfrey Maze’.  There are literally dozens of tracks on Illinois with titles like that (though that’s the worst); luckily, the man is an incredibly gifted musician and songwriter, and not even the most hopelessly puffed-up designation can obscure the talent evident in every one of Illinois’ 22 tracks.  I find myself wondering why he didn’t become super-mega-ultra famous, given that this album would fit pretty comfortably on commercial radio as well as in the dens of indie hipsters.  Maybe he did, but I missed it because I live in India; maybe he just burned out.  That seems more likely after such a feat as creating this record, whose scope extends well beyond the borders of the state in the title and into the hearts and stories of people all over the world.
Most representative track: ‘Chicago’
My favourite: ‘Concerning the UFO Sighting Near Highland, Illinois’ 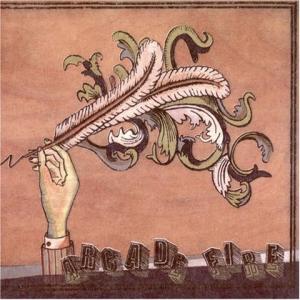 Coming on the scene in 2004/2005 with Funeral, Arcade Fire wound up defining the kind of sound that leads people to make YouTube comments like ‘If you don’t cry watching this, you are dead inside’.  I myself have made fun of their heart-on-sleeve approach, but damn it, they’re so sincere and such good performers that they stay just the right side of ridiculous, like Daniel Day-Lewis’ acting of the 00s.  I can’t fault them for seeing problems with the world and wanting to state, in no uncertain terms, how troubled they are by them; such emotional honesty should be celebrated.
Most representative track: ‘Wake Up’
My favourite: ‘Neighbourhood #1 (Tunnels)’ 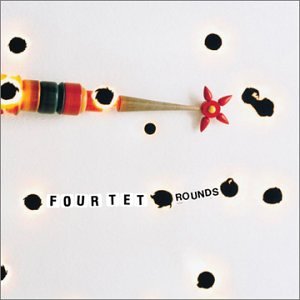 There are great album openers, and then there is ‘Hands’, pulsing into life with a beating heart before layering in textures that slowly reveal themselves, surrounding you, the listener, and sweeping you along in a wave that almost seems to be physically raising you up.  Most of Kieran Hebden’s output is concerned more with texture than melody, with enough rhythm to keep your feet tapping, and Rounds is the apex of his career thus far (though There Is Love In You comes close and will surely be on the 10s list).  His other albums are frustratingly inconsistent, comprised generally of stunners and fillers only, but Rounds keeps its game up after an astonishing opening.  Indeed, the opening quartet of tracks seem to me so good that they might perhaps always have existed somewhere, an undercurrent of energy that Hebden harnessed and converted into a sonic form.  As much as any musician I know, he does things that make me stop dead in my tracks and say, “I could never do that.”
Most representative track: ‘My Angel Rocks Back And Forth’
My favourite: ‘Hands’