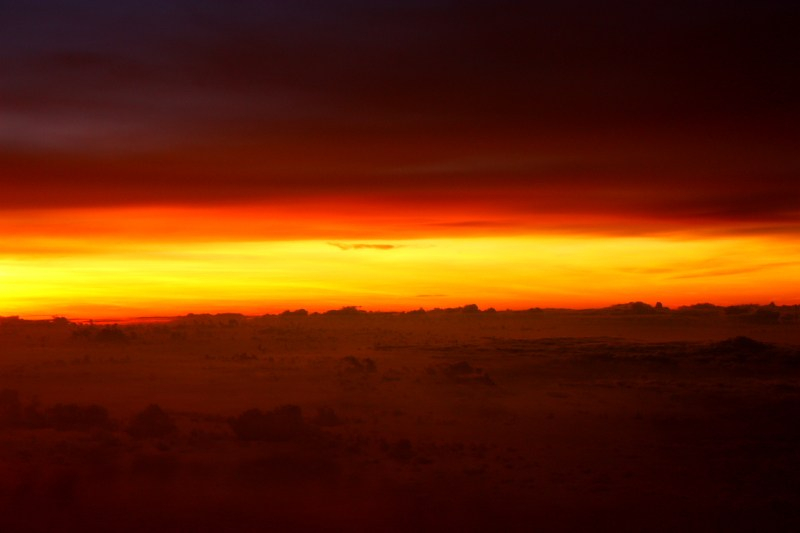 The four lilting chords of Pachelbel’s Canon in D Major drifted upwards from Gary’s pocket. It was the legislated time – seven p.m. – but to Gary, it felt court-appointed, a sentence. His heart beat a little faster as he reached into his shorts, pulled out his phone, and hit ‘Dismiss’ on the display. Pachelbel stopped mid-bar.

I am Oppenheimer, thought Gary. I am Nietzsche, Galston, and Kalashnikov. When they all realise what they’ve done, will they, too, feel their will to live crackle and evaporate, like water in an untended pan? Will they also carry my weight?

Gary’s particular flash of Earth-shattering inspiration came during a morning meditation. Keep breathing, said the voice in his head whenever his mind wandered. But when it wandered to the subject of work, he would often let it run for a while. A lot of his best policy ideas came when he was seated in lotus pose.

Get a woman out there – a nice woman – mother of the nation type – loves nice weather – loves climate change – longer summers – kids running around outside – drives a great brute of a thing – happy to tell her story – imagine the outcry – they’d have to do something then – if they didn’t we’d cruise the next election – put climate change on the front page for good – I’d get on the List –maybe even front bench – Jesus, keep breathing –

As Gary brushed his teeth and dressed for work, he imagined how it would go with the Leader of the Opposition. He would ask him to just hear him out for a minute, to at least listen to the whole idea before dismissing it, to think about how this idea could reverse the appalling slide in the polls. Then he’d explain how Jane Harvey would capture the imagination, and the ire, of the nation.

My car makes summer longer, says Jane Harvey, pictured in front of her four-wheel drive gas guzzler. I do the school run twice a day and leave it running in the garage at home, says Jane. I’m doing my bit to speed up climate change, because if it’s going to happen anyway, let’s get on with it.

She’d go out in the Timaru Herald, carefully selected as the paper most likely to send a story viral. And she would go viral, and the social networks would tear her to pieces, and the commentariat – not to mention the Opposition Leader – would demand action from the government to do something about climate change. Enough is enough, Mr Prime Minister! We can’t have the Jane Harveys of the world spoiling our magnificent country and ruining this planet for her children, and everyone else’s children.

And just like that, for the first time in years, the Opposition Leader would take control of the political narrative, leading to a prolonged spike in the polls and, ultimately, glory on election night.

Never mind that Jane Harvey doesn’t exist, thought Gary as he climbed into his beloved red Audi. No one needs to know that. Maybe one day they will, when Gary releases a tell-all memoir of his long and storied political career. And he’d be lauded, both for coming clean and for an end that justified his slightly underhanded means. Yes, I did manufacture Jane Harvey to stop climate change. And, looking at the results, you’re damn right I’d do it again.

Gary turned the key. The Audi spluttered into life before settling into a clean rhythm. He noticed the gas light was on, and made a mental note to stop off at the service station on the way to work. High octane, of course – 91 put too much carbon on the inner workings.

With the revs up in the 6000s, the track shot away behind the Audi. Lotus pose was best for settling the mind, true, but sometimes circumstances called for a more aggressive form of meditation.

That bastard, he thought. That stupid bastard. Doing the government’s dirty work. He’ll write whatever’s politically expedient to keep his mates on the right side of the House. And people think he speaks truth to power! What a laugh. They’re just as stupid as he is.

– Pedal to the floor – hundred metres straight to hard left –

At first the people had hated Jane Harvey, just as Gary intended. She’s a mother, for God’s sake! Doesn’t she understand how she’s sabotaging her children’s future?

The backlash ensured she hit every front page across the country, and in the vacuum of climate change leadership offered by the Government, the Opposition Leader took centre stage. He began to look positively Prime Ministerial. He wouldn’t admit it out loud, but it was all thanks to Gary.

Then, just as suddenly, the people loved Jane Harvey. That bastard columnist, the millionaire businessman and noted advisor to the Prime Minister, went in to bat for her. She’s onto something, he reckoned. After all, who doesn’t love long summers? Isn’t running the car for another half hour a bit like putting the clocks forward in September?

A couple of TV and radio appearances later, the columnist had started a movement. It’s common sense, they all said, all repeating the refrain until it became an ideology: Who doesn’t love long summers? And there was all this money behind it, full page ads in the paper calling for a new perspective on climate change.

– Quick boost on the revs – then hairpin left –

And that was when the Government finally responded. The Prime Minister did his usual shtick. My job is to listen to the people, and they can rest assured that when it comes to climate change, I’m listening. It made Gary sick. It also made the Opposition Leader sick, and with his bilious green tinge, he managed to get thrown out of Parliament three days in a row. His last action before being shunted to the back bench was to fire Gary.

It looked as though the two of them would be the only casualties of Jane Harvey’s legacy. But then the Government changed the narrative for good. The Emissions Trading Scheme was scrapped entirely, and with the money saved, a new, planet-busting incentive was announced: run your vehicle at home for 30 minutes a day and your petrol bills are free. It’s spending more time outside with the kids. It’s saving on heating bills in the winter. It’s a Warmer Future.

The take-up was like nothing ever before seen for a government scheme. People were given special EFTPOS cards to use at the petrol station: Swipe for a Warmer Future. God knows where Treasury got the money. There were rumours of un-calendared meetings at oil company headquarters. But it was hard to argue with free petrol.

Gary always felt like the Audi took over at this point in the circuit. His role involved extending his right ankle and gripping on tight to the steering wheel, while the complex array of pistons and pipes under the hood worked its magic. He could be anyone, or no one; the Audi and its incredible mechanics were all that mattered.

No, there was one other human contribution: the gas in the tank. This was the final irony. My savings are dwindling so fast, thought Gary, and I’ll never work in politics again. I don’t really have a choice. So, when the Warmer Future sign-up form arrived in his mailbox, he suppressed a gag and filled it out.

Gary shoved the phone back in his pocket, forced himself up out of his armchair, and walked out the front door, grabbing his car keys on the way. The sunset was extraordinary: fat stripes of apricot and amber, like a desert oil well ablaze, lighting up the sky to the west. When he opened the garage door, revealing his prized red Audi, the sunset turned it orange.

He picked a long rubber hose up off the ground and walked around to the back of the Audi, where he massaged one end of the hose over the exhaust pipe. He then took the other end of the pipe around to the right-hand side of the car, opened the driver’s door, and sat down in front of the steering wheel.

Just keep breathing in and out, he told himself. Stay in the moment. In the end, the moment is all there is.

Gary inserted the keys into the ignition and turned them. It always amazed him, the cough and grind in that first second before the Audi settled into a hum of whirring white noise. He tried to think of the last time it had failed to start, but couldn’t remember it ever happening. Apart from the brief convulsions upon ignition, the Audi was perfect.

He looked at the end of the hose and saw the air around it shimmer with fumes, then grow dark with smoke.

Then he stood, walked over to the high windows along the side of the garage, and pushed the hose out. He walked back out the door he’d come in and around the garage so he could admire the sunset from the front of his yard.

His neighbours on either side — Karen, a truck driver, and a banker whose name he’d never caught –were doing the same. Gary nodded hello and glanced at Karen’s enormous truck. It spewed out thick, dark smoke, even when idling. The machines are bigger than us, he thought, as he turned back to the brilliant flashes across the sky. And they’re breathing into life a bright, beautiful, barren world where we don’t belong. And we’ll willingly help them do it.

The exhaust trail from Gary’s Audi snaked off into the atmosphere. He followed it up as far as he could with his eyes until it became indistinct, inseparable from the yellows and oranges above.