This story is completely true and happened to me just now. No, really.

So I was walking briskly back home from indoor soccer. We lost, but it got the Marmite shortage crisis off my mind for a couple of hours.

The walk was enlivened by:

I rounded the last corner with Rihanna wailing in my ears. “We found love in a hopeless place,” over and over. The suburbs of Wellington are not all hopeless — especially not this one, with its promise of a massive Countdown supermarket in the near future — but the lyrics fit the mood of a particularly blustery night.

And then I noticed a strange object in the gutter. 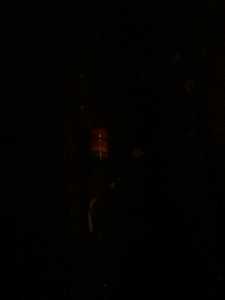 The obnoxious red and yellow markings were unmistakeable. MARMITE.

I paused to pick it up, shaking my head. It was empty, save for a few black streaks inside the jar. I looked up and down the street; there was no-one to be seen.

What could it mean?

Dazed, I wondered if New Zealand had descended into civil war. The Chosen Ones, the ones who had managed to attain Marmite before stocks were depleted, had consumed it all and were hurling the empty jars at the Vegemite-loving and/or Marmiteless hordes. Their Marmite-fuelled throwing arms would turn the empty jars into deadly weapons. (The horror.)

And then suddenly, gloriously, my two fantastical trains of thought – Neo sees the Matrix vs Marmite Anarchy – dovetailed down a single terrifying path.

I was the Chosen One.

The empty Marmite jar was a message from some Sanitarium Morpheus, sent to yeast-extract me out of my cotton-wool world and into my destiny as a saviour: the One who would lead the people of New Zealand back to a land of limitless Marmite.

And then I went home, made a peanut butter sandwich, opened up my laptop and blogged about the whole thing.