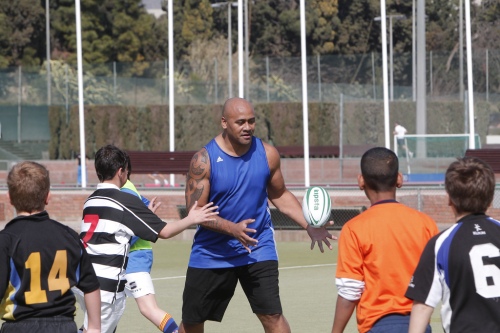 I don’t much care for TV news now. But when I was a kid, I would be in front of the TV every night at 6:40pm without fail. That was when the sports news was read by Clint Brown, or Bernadine Oliver-Kerby, or Peter Williams, or whoever was in the chair that day.

Sometime in 1993, at the back end of the sports bulletin, there was a brief item about a loose forward from Wesley College named Jonah Lomu. Low-angle footage showed him rampaging to the try line from about half way, first bulldozing his opponents out of his path, then skinning them with speed incongruous with the number 8 on his back. I was eight years old and thought to myself, “Bloody hell.”

A couple of months later, again at the end of the sports news, he appeared once more. “Jonah Lomu from Wesley College continues to make waves in the Auckland first XV competition.” Or something like that. It was like an action replay of the earlier item: Lomu gets the ball around half way, Lomu charges through his hapless markers, Lomu sidesteps the fullback, Lomu outruns the covering defenders. Lomu scores.

A year or so later, after a barnstorming performance at the Hong Kong Sevens in 1994, Jonah Lomu was in the All Blacks. A year after that, following his famed exploits at the 1995 Rugby World Cup, he was the biggest star in the history of rugby union. Of course I watched all that in rapture, even if that 1995 final didn’t work out the way I (or Lomu) would have hoped.

The next time I really paid close attention to Jonah Lomu was during the 1996 Hong Kong Sevens tournament. This was long before the days of managed workloads and sabbaticals for All Blacks, even for critical first-team players like Lomu. He showed up for the tournament with his normally sleek black hair dyed brown and braided (at least, that’s what my memory of the live telecasts tells me). The new hairstyle made him look older and rougher, more a tank than the speeding bullet of old.

Lomu’s role in the team was no longer that of ‘superstar’. The NZ sevens hero of ’96 — the guy I would run outside to imitate in the back yard — was 20-year-old Christian Cullen, and Lomu worked more to set up tries for his younger teammate than to score them himself. In one match, against an opposition so helpless they might as well not have turned up, Lomu threw an American football-style pass from the left touchline to the right-hand side of the field, where Cullen cantered in for another five points. I sat there, mouth agape, as replays confirmed Lomu’s feat. How could he do that in a rugby match? Surely there’s some sort of law against it?

Before the tightly contested final against Fiji, the broadcasters showed a package of Lomu sevens highlights from the previous year, when he had that familiar jet black crop of hair. They then cut to Lomu live, braids returned to that classic Lomu hairstyle, playfully sidestepping a Hong Kong Sevens mascot with a huge smile on his face. With his hair so short and his grin so wide, he looked like a schoolboy. New Zealand won the match and the tournament, almost single-handedly because of Cullen, but Lomu lingered in my mind: the cool guy who would chuck the rugby ball from one side of the field to the other, and who would muck around with the mascot before a huge final. Everything in his stride. (You can see snippets of the American football-style pass and the pre-final cavorting in this highlights package.)

One more memory. In 1997, my mother, who was almost entirely indifferent to rugby, somehow secured us tickets to a highly anticipated Blues vs Hurricanes Super 12 match at Eden Park. These were the days of the great Blues: Sean Fitzpatrick, Zinzan Brooke, Michael Jones, Olo Brown, Robin Brooke, Carlos Spencer, Joeli Vidiri, Lee Stensness, Brian Lima, Adrian Cashmore, and Jonah Lomu. But the Hurricanes had Christian Cullen and a talented young winger named Tana Umaga. The match was one of the great Super Rugby games, ending 45-42 to the Blues. I think even my mother got a bit caught up in the spectacle.

That — 1997 — was the year after Lomu was diagnosed with the kidney disorder that would dictate much of the rest of his life. He spent most of the Super 12 season off the field, and he failed to score a single try. But he was in the team for that Hurricanes match. The media was full of doubts over whether he would ever be the same Lomu again, both speeding bullet and tank. There was plenty of speculation among the public, too, about whether we’d seen the best of this great All Black. So whenever he received the ball, there was a hush of attention around the stadium. But he didn’t do a lot with it. Normally, he’d just take the tackle and secure the ball for the next phase, rather than trying anything Lomu-esque.

Then, at one point in the second half, the ball was thrown wide to him, deep in the Blues’ territory. With a slim chance to beat his marker — Umaga — on the outside, he suddenly blew past him and sprinted forty metres upfield. It seemed to happen in an instant: one moment he was sizing up his marker, the next he was being tackled in the opposition half. What had we been thinking? Of course he still had it. He might not be quite so damaging any more, but he was still Jonah Lomu.

We all knew he didn’t have long. But dead at 40? So soon after yet another busy slate of promotional work at the 2015 Rugby World Cup? I guess he wasn’t the type to give much warning.

The truth is that Jonah Lomu has only intermittently been a part of our lives for over a decade now. His status as rugby-s first global superstar ensured media and promotional work around World Cup time, but for every four years in-between, there might only be the occasional news item about his private life or his treatment; the kind of news item that appears well before 6:40pm in the nightly bulletin. Now that he’s gone, he will be the first item, and the second, and the third.

Almost every New Zealander knows one Jonah Lomu moment, which involves Mike Catt. Others, especially those of us in our early-to-mid thirties, might remember quite a lot more. Lomu was our hero, in the sense that Achilles was the hero of Greece: he did things that none of us would ever be able to. I find it hard to believe that someone who loomed so large during my childhood is dead. Bloody hell. At least we have our memories, and we’re charging through them now, crashing into them, sidestepping them, sprinting past them, as we try to keep the legend alive.