Right now I’m listening to ‘Province’ by TV on the Radio and it’s hot and humid, but the feeling inside and around my body is bitterly cold. The sounds of music and exploding crackers are pretty much constant outside from the three separate temple festivals going on near my house in this little tourist town in rural India, but through these headphones, the song takes me back to an inner silence deeper than most I’ve known.

Return to Cookie Mountain, TV on the Radio’s second album, came out in 2006 and I bought it the same weekend it was released. It was the middle of winter and I was living in Christchurch – yeah, that place that got hit by a big earthquake a month ago, but not as big as the one in Japan, but still pretty big.

I was living in the centre of town, in a building which apparently no longer exists, and working just a few minutes away next to the city’s main landmark: Christchurch Cathedral, and its Cathedral Square. I walked that 750 metres to work and back hundreds of times over a year and a half living in that flat, and while the brilliant blue skies and pleasant, dry and warm summers were wonderful, I’ll always remember Christchurch for its winter. 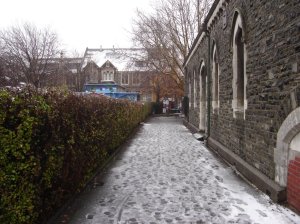 Christchurch winters aren’t desperately cold by global standards, hitting probably -5°C most nights in the July that Return to Cookie Mountain came out. This was cold enough for me, though, having grown up in the warmer North island, but luckily there was a trade-off: of the hundred bone-chilling nights of each year, one (or maybe two if we were very lucky) would be covered with real snow.

To warm that chill in my bones in the evenings, I’d take my CD player and listen to something as I walked. The walk to work was only a song’s worth, or half a song if I was listening to Orbital, and while I sometimes had my earphones in as I walked in the door of the souvenir shop I worked at, I usually felt like I was being a bit gratuitous. I mean, how hard could it be to walk five minutes without a personal soundtrack to occupy me, to handle the world outside my home without cutting out its sounds and replacing them with something which seemed more like part of me?

The walk to the video shop, however, was different. I would go to Alice in Videoland every Thursday evening to drop off last week’s rentals and pick up new ones. Wednesday and Thursday were my days off back then, my weekend, and I could hardly think of a better way to spend an hour than browsing the shelves at Alice’s. And being a full fifteen minutes away, I could fit in three songs, making the CD player a much more reasonable option – and for a good month or so, those three songs were the first three tracks of Return to Cookie Mountain. 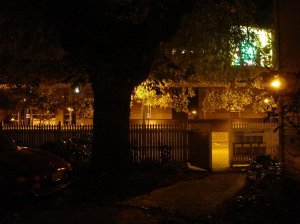 I’d throw on my long black jacket, shove the CD player in the inside pocket, lock the flat behind me and press play as I got out into the street. Shuffling my gangly, poorly conditioned limbs along those gold-tinged, immaculately paved streets with TV on the Radio in my ears was pretty much perfect. I’d go into and through a near-empty Cathedral Square and as I came out the other side to cross Colombo St; a gust of icy wind from the Port Hills would throw my hair up and cool my face, and I’d wrap the front of my coat closed to ward off the cold.

Right about then, Province would start up. And I’d listen to it, Adebimpe, Malone and Bowie wailing about love in harmony as I walked on down High St Mall and then High St, past that cafe (whose name I’ve forgotten) I ate at with Ed and Rach, past Helen’s design studio, the song closing out just as I stepped off the street and into Alice’s – ah, heaters – the new releases there, as always, to greet me.

And I never forgot that feeling, somehow, without ever thinking about it. The music gave me an anchor on which to hang the cold, the coat, the flat and the paving stones, the cathedral and Alice’s, all those feelings enveloped by the sounds in my ears. On those 15-minute walks, ‘Province’ took on its own private meaning for me, one which I didn’t realise at the time: it would be the song that took me back to a certain time in my life, a particular feeling, the subtly indescribable emotion and physicality of it.

It’s simple, really. The memory is stronger than the song, but as an element of my life which remains constant however far I get from the memory, the song is what brings it all back. That’s to say, I can listen to ‘Province’ today in my hot house in India and it will still be the same ‘Province’ as it was four and a half years ago on the cold, dry, clean streets of Christchurch. The memories, dormant in this magnificent organ called a brain, come flooding back as clear as ever when I hear those simple chord progressions struck firmly on the piano. 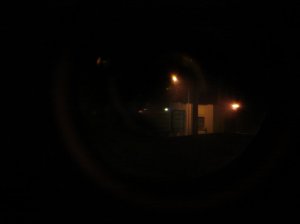 It isn’t classical conditioning, but I’m sure there was something I concurrently studied in psychology classes that matches up. I see songs like ‘Province’ as an anchor on which I hang my memories, and it may have only been a flash of a millisecond back in 2006 where I felt the music, the cold, the city and everything else that stayed with me, but sometimes that’s enough to bring it all together and cohere into a memory that stays with you for the rest of your life.

Now, tell me your musical anchors.

(My brother wrote about this ages ago, so check out his post too. I give him the credit for getting the idea out first and for being an inspirational older brother who inadvertently plants ideas in my head.)