In my childhood, I had two dreams: (1) to play for the New Zealand cricket team, and (2) for there to be cricket on television every day. In view of the fact that I am currently here writing this article instead of in Sri Lanka with the Black Caps, we can safely assume that (1) did not come true. (2), however, most certainly has, and in amongst the deluge of statistics and ludicrously controversial no-balls, I finally understand that old maxim: be careful what you wish for.

I was at a work meeting a few months ago when something curious happened. We were sitting at a long table, and I noticed that on the opposite side from where I sat, every person had a moustache. As I looked along their faces, all focused intently on the boss’s rhetoric, I was spontaneously seized by a powerful urge to burst out laughing. It seemed so hilarious, like this unofficial uniform – absurd, almost, if it weren’t for the fact that I wore a moustache myself.

With the release of The Last Airbender last month, M. Night Shyamalan’s reputation – already damaged by a lukewarm response to The Village and outright critical disgust at Lady in the Water and The Happening – has reached new depths.  Celebrated film critic Roger Ebert, who once championed Shyamalan’s natural skill and craft, wrote a ½ star out of 4 review and began with the following: “The Last Airbender is an agonizing experience in every category I can think of and others still waiting to be invented.”  This is it, the nadir of one of the world’s more famous NRIs.  Having had the film world at his feet a decade ago, in 2010 he cannot possibly sink any lower…

Varkala’s cliff area is essentially a lawless zone, a modern-day Deadwood. Okay, perhaps that’s stretching it, but compared to Bangalore with its strictly policed 11:30pm curfew, The Cliff is debauchery incarnate. In traditional-minded Kerala, Varkala is a strange outpost of Western freedoms – a sort of tiny imitation Goa – and the contrast with its surroundings is marked. Bodies lie strewn about the place, some of them topless; people flirt openly and flaunt their sexuality; alcoholic beverages are consumed; someone over there may even be sparking up a joint. And that’s just the beach.

I have never seen a Mollywood film all the way through, but I know all about Mammootty and Mohanlal. If you’ve spent any time at all in Kerala, you’ve met them: at the barber, the supermarket, the mobile phone shop, the inside of your rickshaw. From these various static vantage points, their visages keep a close eye on everything that goes on in any given town. It goes without saying that Mammootty and Mohanlal are always on TV in Kerala, often on more than one channel at a time. Wherever you go, whatever you do, the state’s two superstars are looking over your shoulder. And that is only the beginning of their influence.

It was at a packed intersection in Koramangala that the general absurdity of a night out in Bangalore first became apparent. Vikram, our stylish college student friend, was driving Em and I to the MG Road area and its assortment of bars and pubs, blasting an addictive dance track on the stereo, but the music wasn’t going to push us through this red light faster. As we waited for the lights to change, a woman in rags holding a crying child approached the window. “I don’t care if you can’t dance, just wanna see that ass bounce,” bellowed the speaker system as she held her hand out to us, then to her mouth, then to us again. I pushed a ten-rupee note into her hand and wound the window up. She stayed in the same spot as the lights changed and watched us as we pulled away, her flat expression unchanged by our encounter.

When it comes to the line between fiction and documentary film, I agree with Werner Herzog: such a line is unnecessary, and essentially imaginary.  Separating them as fabrication and fact takes something away from both: the truth that can be captured in a story written and performed well, and the art exercised by a director presenting the beauty of real events.  A far more worthwhile approach is to consider both simply as films.  You can learn as much about yourself watching a film from a Charlie Kaufman script as you can be entertained by Michael Moore polemic, right?  And anyway, when you have people like Herzog mixing truth and untruth in all of his films – documentary or otherwise – to quite magical effect, it is sometimes impossible to choose which category the film you’re watching belongs in.

Nevertheless, bookstores need sections to separate one genre from another, and blogs do too.  So here we are.

The 00s brought much wider recognition and appreciation for documentary cinema, and I would suggest two chief factors in this.  The first is called Bowling for Columbine, and I’ll talk more about that further down the page.  The second is called the Internet, opening up a massive global audience for all kinds of films and an ideal platform for docs – the proliferation of other media and information online makes it quick and easy to obtain as much or as little information about something as you would care to.  Added to that, making a film is much simpler nowadays with digital video and cheap and powerful editing software, so legions of budding filmmakers are able to produce something for nothing and then put it online for the world to see.

I’m one of those budding filmmakers.  Here are ten documentary films produced in the 00s which eventually inspired me to get started on my own movie (coming soon, watch this space…) 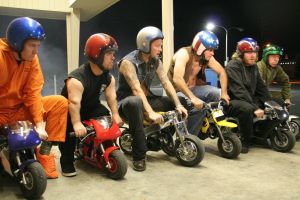 Weren’t expecting that, were you?  The Wikipedia page states, “Jackass Number Two is a compilation of various stunts, pranks and skits, and essentially has no plot.”  A remarkable document of extreme behaviour, voyeurism and (arguably) Dadaism, it is also one of the most entertaining films of the 00s – but only if you have the stomach to watch Steve-O attach a leech to his eyeball, or Chris Pontius insert his penis into a snake’s cage.

Perhaps the 00s’ most depressing film; certainly the one which made me feel most sick and sad at the state of the world and the human race.  Lake Victoria used to be a typical African lake, basically as it would have been millennia ago, until Europeans introduced the Nile perch – a particularly large and tasty fish – into its waters.  Within years the ecological balance became completely unhinged, and as this film shows, the ripples reach out from the water and into the lives of every person living in the area.  While I sometimes pine for those innocent days of ignorance before I saw Darwin’s Nightmare, this is a desperately important film that everyone who professes to care about their fellow man owes it to themselves to see.

Read my full review for a closer look, but where sweeping statements are concerned, it isn’t too much of a stretch to say that this effort from first-time director Li Tao was the most enlightening and inspiring film to come out of New Zealand in the 00s.  If nothing else, it was certainly the most moving, and offered a restrained yet deeply intimate portrait of the life of teenaged Chinese going to school abroad.  This is something that happens everywhere from Wellington to Washington, and Tao has made the film about the experience.  After seeing it, I prayed that it would reach as wide an audience as possible so the greatest number of eyes could be opened, and minds broadened.  The DVD can be ordered here.

Bowling for Columbine was the film that brought documentaries (back?) into the mainstream.  Grossing millions and garnering an Oscar, it cut a swathe through the film market and brought the masses to see that they could be entertained as they were being informed.  In many cases, it showed people such as myself that there are alternatives to mainstream media.  Its biggest impact, however, was probably to promote Moore’s personality to the point where his next film would gross over US$100 million – staggering for a ‘documentary’ – and his movements and polemic became worldwide current events.  In the wake of its cultural relevance, it might be easy to forget how good Columbine is; while Moore occasionally messes with the truth in order to keep the viewer hooked, he crafts a superb viewing experience that keeps you amused, shocked and riveted for the duration.  The best moment comes when Marilyn Manson has his turn to speak and, with no pomp whatsoever, quietly sums up the entire movie. 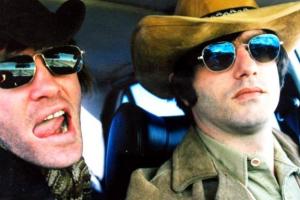 Truly demonstrating the benefit of hard work and dedication, Timoner spent seven years following The Dandy Warhols and The Brian Jonestown Massacre and managed to edit weeks of footage into DiG!, one of the best films about music.  It has at its centre the towering talents and ego of Anton Newcombe, who would surely be a bigger star than the Dandies’ chiselled frontman, Courtney Taylor-Taylor, if he followed his rival’s music business motto: “if it’s good, it’s fun; if it’s bad, it’s funny”.  The film follows as the two bands start off as close friends, living and jamming together, then steadily drift apart under the gaze of Newcombe’s increasingly unhinged wild grin.  Tambourine player Joel Gion’s perpetually amused attitude is a joy for every moment that he’s on screen.