I’ve been in Japan for 14 and a half months now, and the longer I stay here, the less settled I feel. The concept of being ‘uchi’ (inside) or ‘soto’ (outside) is felt every single day in some way or another, whether it’s through furtive glances on the train, having the menu flipped for you in McDonald’s or the extra polite, nervous service gaijin often receive in department stores. 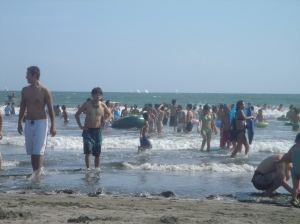 I suspect that it is still impossible for a foreigner to become uchi, what with the population being about 98.5% homogenous and still apathetically embracing traditional methods of conducting business and polite conversation. You can come pretty close if you try hard enough, though, and take on as many characteristics of your hosts as possible. Thing is, you have to want to, and I really don’t want to. In this situation, living somewhere but not wanting to become part of the current culture, you have two options: 1) leave the country, or 2) retain as much respect as you can for the country you live in, its people and customs; keep everyday frustrations to a minimum and accept things that frustrate you as part of the culture and something to be at ease with; and above keep your own sense of identity strong in a way that you’re comfortable with yourself without being aggressive about it, and comfortable with the way you’re received by the culture even if it isn’t how you’d have it ideally.

So, I’m leaving. Weren’t expecting that, were you? I’ve tried option 2 for a good while now, and if I’m honest, I could quite easily go on here for months, even years longer, but I’ve reached a point where I realize that the longer I stay, the more I have to suppress my natural self, and I can’t see how that’s healthy. It either means I’ll become something I’m not, or more likely, wrestle with myself on a daily basis knowing what I have to do in a given situation is quite different from what I want to do. As well as that, it’s a lot easier to survive in Japan if you think less – just do your job as you’re expected to and hang out with a regular group of friends, and your worries inevitable diminish – and until recently, I could feel my brain slowly shutting off, my mind consciously less stimulated, just coasting through my days giving very few things a second thought. 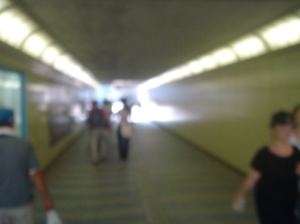 It’s my time. I’ve loved living here for so many reasons – the wonderful friends I’ve made, the beautiful kids I’ve taught, the incredible things I’ve seen… I’ve also learned more about myself and the world around me in this past year than the previous four combined, partly because of living in this foreign country, and partly through having my first serious relationship with a woman. I just have to go, though, and I have to go now. I have to go to a place which is different from this one, where I can focus on becoming more open and direct and not worry so much about keeping this safe and comfortable, which is such a big part of existence here.

India is my next destination. I’m not sure what’s going to happen there, but I know it will challenge me in so many ways and will be very, very difficult to cope with at times. But that’s good for me. It’s all about me, in case you didn’t notice. For once, I’m not that bothered about concentrating completely on my own development, and I’m very pleased about that.