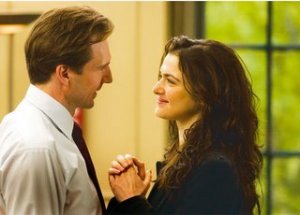 After only two feature films, Fernando Meirelles has developed a filmmaking style that is recognisably his own. Every frame of The Constant Gardener, like his brilliant debut Cidade de Deus, is clearly stamped with his seal – this is something that few filmmakers can attest to so early in their career (others that spring to mind are Sofia Coppola, Darren Aronofsky and Pawel Pawlikowski). His style is characterised by an (nearly) always moving camera (often handheld), washed out tones, and a lot of quick cuts. Personally, it’s not the kind of style I would use to make films – I prefer things to be slower, more meditative – but it is undeniably effective, especially given the subject matter he has tackled.

Justin Quayle, a diplomat, meets and marries activist Tessa. Both of them have a lot of work in Africa, particularly Kenya, and Justin starts to suspect Tessa is keeping secrets from him. She is then murdered, leaving Justin with a lot to find out, particularly concerning international pharmaceutical corporations. Don’t worry, it gives nothing away to mention Tessa’s murder, because that is what opens the film; it is the event that forces Justin to stop treading carefully, and start demanding answers to very big questions.

For the first 45 minutes or so, The Constant Gardener is deliberately beguiling – it moves so quickly that it takes an effort on the viewer’s part to keep up with what is happening. We see Tessa in various situations – urging Kenyans to take AIDS tests, confronting people from big pharmaceuticals, and questioning her marriage. We don’t know exactly what it all means because the puzzle pieces don’t fit yet, but eventually the answers will come – we feel like Justin, because we care about this woman and want to know what happened to her, but we have only snatches of information from which to seek answers. It’s so rare for a filmmaker to simply provide the viewer with little details and leave the dots unconnected at first, before eventually rewarding our interest by steadily revealing more information. Cidade de Deus was similar, if more clear (probably because it used voice-over); I love that he respects the audience and gets us thinking before offering more. Too many films spoonfeed information leaving us with no work to do; this, however, is serious, intelligent, adult filmmaking to be savoured.

In the role of Justin, Ralph Fiennes (my distant cousin, hooray) is good, effective. unspectacular. He does awkward well at first, but develops a hardness as the character becomes more and more disillusioned with his surroundings. Rachel Weisz as Tessa, however, is even better – a very complex character with positive and negative qualities, a character we love in spite of our reservations. Given not a lot of screen time overall, she brings this character expertly to life – it’s one of those pieces of acting that make you forget the actor. Weisz is a beautiful, talented woman; I believed this before The Constant Gardener, and am completely sure of it now.

It does lose its way a little towards the end, however, as the influx of details is a little hard to cope with and may be unsatisfying for some; still, that is what repeat viewings are for. And what was the deal with Pete Postelthwaite’s accent? Still, this is overall a very effective film. Just as Justin is forced to question the world around him, so are we; how can we accept the atrocities being carried out by corporations and government officials all over the world? We must confront not only the sorry state of our world, but also our own morals and ethics. Place yourself in Justin’s situation. Would you be willing to put yourself in danger in the search for answers, or would you protect yourself and not rock the boat? Stay in your seat for the final credits: there is a postscript from John le Carré that gives the story a little more power.