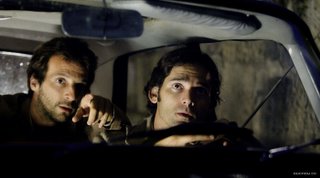 I hate it when movies are lumped with political agendas. Nothing distracts more from a good story than obvious political content, and it is equally frustrating when that content is forced upon the film by statements in media. Munich suffers from the latter, but tellingly, not the former. (Here and here are two very insightful pieces of comment by Spielberg himself, defending his film.) Words have been spoken at length in the press about its supposed defamation of Palestinians, or of Jews, etc etc etc. I was aware of all this going in, and to my delight, these statements were proved to be totally reactionary. This film sides with no group or individual; it sides with humanity, our collective desire, and shows how misguided we can become in our pursuit of the fulfilment of that desire. It’s a film made by people who care about people, not a piece of propaganda designed to convert minds to a different way of thinking.

Munich is based on true events – the series of hits carried out in the wake of the killing of 11 Israeli athletes at the 1972 Munich Olympic Games. However, its focus is not so much political, but more on the implications of these incidents on one man. And, in keeping with my own philosophy for filmmaking, this refined focus offers a more inclusive and substantial view of the human condition than a wider scope could have. We watch as Avner (Eric Bana) leads his team through several hits, his life becoming more and more complicated; we don’t condone his actions, and neither does the film, but we sympathise with him because he has real concerns that we can relate to. Family, morality, legacy. The big issues, the ones that really matter.

The screenplay drives the film forward nicely, becoming more focused as it progresses (which I like); it also has room for brief moments that do nothing to advance the plot, but flesh out the characters infinitely better. The acting is decent; Bana is not a great actor, but he is a good one, and he carries the film well – we want to know what happens to his character, and we understand what’s going on through his eyes. It’s every inch Spielberg’s film, though. Many shots are masterfully composed, shifting our focus from one character to another with considerable skill and a great deal of style. It moves at a swift and even pace, making the long running time fly past. And, as I have stated many times already, it is very well focused for a film tackling such grand issues. My hat is off to the guy; he’s hardened a lot since E. T., that’s for sure. Of particular note are the assassinations: they are brilliantly executed, exhilirating set pieces that linger long in the memory.

A few overly dramatic choices bring it down a bit. The sex scenes that bookend the film are gratuitous, especially in that they are integral to the overall message; there had to have been a more toned down way to get the point across. Some of the accents were not very convincing, especially Daniel Craig’s – a minor quibble, but it is distracting. And occasionally, the violence is a little bit too brutal. It’s horrifying and realistic, but too much of it can be numbing, and Munich comes close to reaching that stage.

Some of us may have a collective goal, but are we justified in doing everything in our power – including killing other people – to obtain that goal? And how does it compare to watching our children grow up, or looking into the eyes of a friend and knowing that there is mutual trust and respect? Munich raises many questions, none of which have simple answers. Like The Constant Gardener, it promotes an awareness of what atrocities are being committed in the world, and it promotes a better attitude towards each other and ourselves. Everything isn’t just going to be all right if we carry on like this, so let’s all do something about it. Classic Spielberg themes, in a way, but rarely have they been better handled.