“Sir.  There is a problem with your visa and you must vacate the hotel immediately.”

We’d already taken a shower, unpacked our clothes for the wedding reception and were trying to relax and watch some mindless TV.  I tried to reason with him.  “I thought the situation was clear.  I have the required papers showing my visa extension is under consideration and I went and got papers for my fiancée.  Our stay was approved.”

The attendant was unmoved.  “I’m sorry, sir.  You must vacate immediately.”

I resisted the urge to slam the door in his face or shout obscenities, despite my overflowing exasperation.  It wouldn’t do any good to get angry.  After nearly a full day of running around Thiruvananthapuram trying simply to get a room for the night, it was finally time to give up.  Bureaucracy had beaten us.

I got on that plane, still buzzing from all that had just happened, and the first leg of my journey to India began. To Beijing first, sitting next to a Japanese guy who studies there and was reasonably tolerant of my show-and-tell. Man, I showed those letters and photos to anyone fool enough to stop for a second, but I’ll shut up about that now. 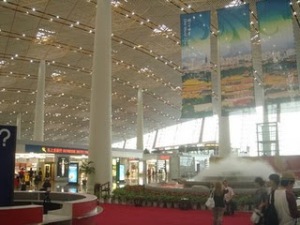 Beijing had a new terminal built for the Olympics, terminal 3. It is quite ludicrously cavernous, like some evil dragon mastermind’s lair for plotting world domination OH WAIT… lucky I didn’t try and post that using the government’s free wireless in the terminal. Actually, Blogger is usually blocked in China, but for the duration of the Olympics they let the guard down to avoid awkward situations. But I digress.

From Beijing I continued on Air China to Delhi, sitting next to another Japanese guy, this time with a thirst for travelling. We talked a fair bit about the places we’ve been to (many for him, very few for me) and he gave me his card and said I should email him in case there’s a chance of us meeting up again in India or somewhere further down the line. It’s nice to meet such people on one’s travels.

Indira Gandhi Airport at Delhi is a little dustier than Beijing, Narita or Auckland, but all my luggage arrived so I didn’t care. That was kind of what I wanted, leaving those obsessively clean and mechanical aspects of Japan behind. Hilariously, I didn’t go through any customs of any kind; the channels were there, and they were staffed, but they were so bored and disinterested that you could probably get through pushing a hive of bees. I did have to change money, though, fighting off those attempting to push in ahead of me in the melee that is a queue in India. That’s one thing the British left alone.

I’d booked my hotel in advance and arranged for them to pick me up at the airport, and sure enough, there was a young guy waiting with an A4 printout saying my name. I went up to him and, without a word, he started walking and beckoned me to follow, barking instructions to someone on a cellphone. We got outside, where the sounds and particularly the smell of the city were quite different from anywhere I’ve been before – funny how those are the senses I link most to my memories of arriving – and made our way to a beaten-up blue van with a glow-in-the-dark display of the Hindu Holy Trinity illuminating the dashboard.

We weaved our way across city roads which were largely deserted but still required the driver to sit on the horn for much of the time. I’ve only this week understood that here, the horn is not reserved for emergencies or frustration; here, it’s as vital a road tool as indicator lights or clearly defined road markings are back home. You blast the horn to notify of your presence. If you don’t, you won’t be seen and are likely to cause an accident. It makes sense in the absence of those things I just mentioned, and now it’s as much a part of the aural wallpaper as the cicadas were in Kamakura. 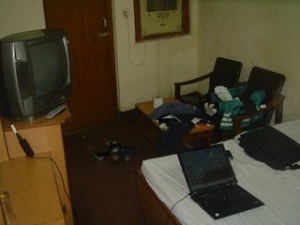 Eventually we made it to Hotel Vivek, my home for this night and the next. I didn’t realize it was going to be in basically the roughest part of Delhi (and possibly all India), with shopkeepers hurling insults at me as I ignored their invitations for a cup of tea or a light meal at 2 in the morning. I also didn’t expect to see an albino lizard scurrying across the wall behind reception, a reception staffed by three men who seemed quite put out by the fact that I wanted to stay in their hotel. (I saw the lizard again the next day, so I’m guessing it’s like most hotels have a cat, just this one has an albino lizard.)

At such an early hour and after a day’s worth of travel, I was a little overwhelmed by dealing with a place so different from anywhere I’d been before. Still, I breathed a sigh of relief that I’d made it with no hint of difficulty, and appreciated the fact that this kind of cultural atmosphere was going to help me grow in so many ways. To my non-descript, dusty room, and to sleep… much more to come.