My day job involves a lot of sitting at a computer, wearing headphones and performing monotonous tasks. In fact, it involves nothing but these things.

When I just can’t take it any more, I like to go for a quick walk to Technomall’s small bookstore. There, I can awaken a few different areas of my brain as I process the new books that interest me, relish the prose of good writers and laugh inwardly at the cheap tack by the crap ones (until I feel guilty, because while I might think ill of these writers, it’s a certainty that someone out there who reads this will mock me mercilessly for it).

Usually I stick to the fiction section, with its stock of prizewinners and the cream of Indian literature in English. Today, however, I stumbled upon a section I’ve always avoided in bookshops: the self-help (or ‘personality development’) section. I mean, I read David Cain because he is actually kind of inspiring and not force-fed down your throat, but I’ve never felt a need to consume chicken soup for the soul, or to read one guy tell all about the differences between rich dads and poor dads like it’s some big secret. Speaking of which, I’ve sure as hell never been interested in The Secret.

But there are so many of these books.

I looked closer at the bookcase, but became steadily more uncomfortable as I contemplated this particular book’s title. 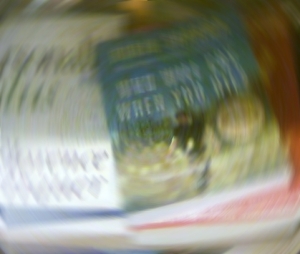 One minute had been enough. Those monotonous tasks weren’t so bad after all. I returned to the office, inspired back to work in a new and unsettling way.

(For the record, Viktor Frankl’s ‘Man’s Search for Meaning’ gives value and meaning to this entire genre. Have you been inspired or helped to see things in a different way by a self-help book?)