I’m now 29 and I have no kids. No property or other investments, either. I would like all of those things at some point in the future, but they aren’t my priority at the moment. I’m more interested in travel and pursuing new opportunities in my career. Round up a few other 29-year-old New Zealanders and see how many say the same thing.

Most of what follows is about me.

The best twenty seconds of a song I heard this year were 3:10 to 3:30 of ‘The Red Wing’ by Fuck Buttons, from the album Slow Focus.

My music listening habits never really developed past the age of 16, when I got my first computer. I come across a new album and listen to it once or for months on repeat. Slow Focus was my favourite album of the ten or so new ones I heard this year. James Blake’s Overgrown would be next, and I also really liked Nothing Was The Same by Drake.

The steady accumulation of layers and abrasions on ‘The Red Wing’ reaches a glorious, spine-tingling apex about halfway through. My second favourite twenty seconds of a song are also from ‘The Red Wing’ as it starts to devolve from 6:10 to 6:30. The album as a whole is relentlessly dark, loud, and repetitive; it calls to mind the twisted sensations of being off your face in a dark nightclub, or the sick emotion that accompanies losing something important you can never get back. It drags me through a 45-minute catharsis. My kind of music.

Oh, the best New Zealand album I heard this year was Anniversary Day by JP Young. It would be my favourite album of the year but it came out in 2012. I recommend you go and listen to (and maybe buy) it now, especially if you have any connection to Wellington. It is a genuinely great album, poetic and easy to get along with.

In my dictionary (the excellent WordWeb), the first definition of ‘politics’ is Social relations involving intrigue to gain authority or power. No wonder it fills so many pages in the newspaper and minutes on the airwaves. Not here, though.

From in front of that massive, stunted goal in Shed 1 – about waist-high and about a third of the width of the pitch – James rolled the ball out to me. I was just on our team’s side of the halfway line, the opposition goal about fifteen metres behind me. We were ahead, but we’d just conceded a goal and needed to regain control of the run of play.

I leaned back slightly as the ball reached me and tapped it with the outside of my right foot to MHS, who was over by the left sideline. As he put his foot on the ball and drew a defender, I spun round and sauntered into space a few metres downfield. Just as I was nearing the penalty spot, with no defender near me, MHS took a couple more touches and tapped the ball past his marker, into my path. In my peripheral vision, I sensed two things: one, the opposition goalkeeper was positioned slightly to the left of the centre of the goal, back near his line; two, an opposition defender was rushing at me from my right.

As the ball ran in front of me, I controlled it with one touch from my right foot and – judging that I had less than a second in which to act before I would be tackled – snapped a left-footed shot along the ground, past the oncoming defender, and into the bottom right corner of the opposition goal.

The exact same sequence of events could have happened a hundred years ago, albeit on grass rather than turf and with a plain leather ball rather than a bright yellow plastic one. I will remember it for decades, just as I remember my chipped goal from near halfway in a second XI match at high school and a perfectly timed flick off my pads for four from the first ball I faced in house cricket. Such moments in our sporting lives are timeless.

I seem to be getting more bored with the movies. I went dozens of times this year, more than I have since about 2006, and I always enjoyed myself from start to finish, whether it was any good or whether the dude behind me provided a running commentary throughout (as happened in The Hunt and at least one other film I can’t remember). But I rarely left feeling inspired to talk about what I’d just seen, or to think about it a week later. The prime example of this was Hyde Park on Hudson, a film so bland I barely remember seeing it.

Good films I saw this year included 20 Feet From Stardom, The Act of Killing, Before Midnight, Fast & Furious 6, Gravity, The Hunt, Like Father, Like Son, Mr. Pip, Much Ado About Nothing, The Place Beyond the Pines, Wadjda, and (if I’m allowed this one) Lawrence of Arabia in glorious 4K at The Embassy. Despite its flaws – particularly a lack of balance between its three parts – The Place Beyond The Pines has stayed with me, proving that striking a resonant tone in film is less tangible than the technical combination of good characters, dialogue, cinematography, sound, and editing. The Place Beyond The Pines only had these things in patches, but I haven’t forgotten it.

Casting a wide shadow over all my cinematic joys this year was the disappointment that Cloud Atlas was not released in cinemas in New Zealand. The distributor must have gotten cold feet at the prospect of selling Kiwi audiences on a three-hour epic with six ongoing storylines painted in broad archetypes, which seems like a fair decision when I look at that sentence, but Cloud Atlas somehow fulfils its extraordinary ambitions and offers a new kind of multi-layered spectacle in film. I watched it at home, alone on the couch wearing headphones, oblivious to a storm raging outside. It was the best new film I saw this year, and when a stranger says they also loved it, I feel like the film is recommending that person to me.

A couple of months ago, someone did a memorably recognisable impression of me. They held a smartphone close to their face, jabbed it with their index finger, and muttered, “Just… fucking… work!”

The way I treat the technology in my life has become a good indicator of my mood. The more accepting I am of my phone becoming unresponsive or my laptop shutting down unexpectedly, the better my overall frame of mind. If I’m already frustrated, I swear and click the mouse harder and bang my foot on the floor. I apologise to my colleagues for this.

The fact that my use of electronics can be seen as a barometer of my psychological state suggests how deeply I’ve involved these objects in my daily life. When you spend more than half of your waking hours with someone, or something, some irritation is inevitable. But if I lost them, it’d be like losing one of my senses. 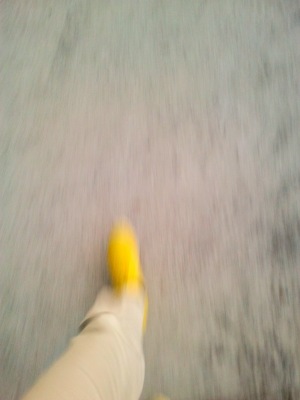 In August I went to the launch of Eleanor Catton’s The Luminaries, putting one foot in the world that knows her as ‘Ellie’. She complimented me on my yellow shoes, and I asked her how she was feeling. “A bit overwhelmed, to be honest,” she replied, looking around at the faces and wine glasses packed tighter than ever into Unity Books. This was a couple of months before she won the Booker.

After the launch, Nik and Ant and I discussed what a positive occasion it was. A good person being celebrated for an amazing feat of creativity. I still haven’t finished reading the bloody thing because I am so terrible at reading books, but it really is great, and I will get there.

In September I went to Brisbane, and in December I went to Nelson. First holiday was alone, second was with a companion. The weather was great for both.

I think it has to be Tara, four months in, as wonderful as my colleagues, friends, and family are. She plucks snails off the footpath and places them safely in the bushes. She attempts to identify each bird she sees: “Thrush? Female blackbird?” She is comfortable speaking to strangers on the phone. She writes good emails. She gives excellent gifts. Our conversations flow easily, weaving from meaning to silly madness and back. Perhaps I am overly observant, but she means a lot to me.

Also, the Internet has a slightly diminished role in my life right now but I was lucky enough to get to meet Charles, Dan, Kathleen, Isabel, Martyn, Naomi, Neha, Reena, and Sarah this year – all people I came to know about through Twitter, and who have all been teachers in some way or another. Each year brings more new connections, and some old ones rekindled. Many bleed happily from one medium into another: Twitter, then Facebook, then a coffee shop or a pub. There will no doubt be more new people in 2014 – more good people, and more effort not to spread myself so thinly.

Thanks for coming and looking at this. The years are all arbitrary but regardless of what has happened in 2013, I hope 2014 is all right for you.