5. TV on the Radio – Return to Cookie Mountain (4AD/Interscope)

Indie as a genre ceased in the 00s to mean simply ‘independent’, and took on more of a ‘wet, hipster douches trying to sound plaintive and postmodern to mask the vapidity of their music’ connotation.  Thankfully, TV on the Radio were present to reclaim some of the ground lost by actually using their indieness to push the musical envelope as far as they could.  After one outstanding EP and one inspiring debut album, they delivered Return to Cookie Mountain, one of the more ambitious records ever released by a band that’s just about to make it.  It starts with ‘I Was A Lover’, a disorienting cluster of broken horn and guitar samples over a synth beat, and continues to challenge the listener’s expectations in basically every track on the album.  Through it all, twin frontmen Tunde Adebimpe and Kyp Malone are electrifying, their distinctive and pushed-to-the-limit voices giving extra power to their deep and artful lyrics.  This was an album that was brilliant in ways I never expected it to be, seemingly designed to be hard to pick up.  I think the message TV on the Radio sent in the 00s, on this and their similarly essential other two albums, was that the music world needed a shake-up and that they were the ones who would do it.  Their attitude as thinkers/innovators who don’t mind the odd ‘fuck you’ to the establishment suggests that they might never make a weak album.  They shook me all right, quickly working their way into my thoughts and memories, and I’ll never be the same again.
Most representative track: ‘Wolf Like Me’
My favourite: ‘I Was A Lover’

4. Junior Boys – So This Is Goodbye (Domino) 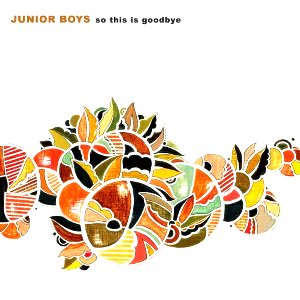 I came to love So This Is Goodbye when I was the sickest I’ve ever been in my life.  It was the beginning of 2007, and I’d just secured a job in Japan and scored a goal from the halfway line in futsal.  The resulting elation and exhaustion brought on a 40°C fever, which rendered me stricken by hallucinations and unable to focus on a screen or page long enough to browse the net, watch movies or read a book.  Fortunately, I’d just discovered this emotional and precise Junior Boys album, downbeat enough to keep me grounded but with the requisite mechanics and care in arrangement to help maintain a pulse.  There wasn’t a single dud, so I could chuck it on repeat and let it run for the day, discovering new intricacies and rediscovering favourite moments from my stupor.  I suspect everyone who loves this album remembers in detail the time and circumstances during which they first experienced it, infused as it is with such wistfulness, nostalgia and clarity.  It’s a breakup album, so many of them will link it one of their own failed relationships; I can’t tell you about that, though I would love to hear from them.  From the subtle, hinting lyrics of ‘Double Shadow’ to the haunting sparseness of ‘FM’, this album is meticulously dealt and exceedingly tight despite its fragile appearance.
Most representative track: ‘The Equalizer’
My favourite: ‘FM’

Is Girl Talk the music of the 00s?  Night Ripper was the moment at which everyone stood up and took notice of mashups as a viable contender for becoming a consistent presence on the airwaves, but for me, Feed The Animals represented a refinement and deepening of Gregg Gillis’ aesthetic and the apex of his output thus far.  I read in an interview that people at his shows are no longer getting excited at hearing Lil Wayne rap ‘Lollipop’ over ‘Under the Bridge’, instead jumping higher and whooping louder for the fact that it’s one of ‘his’ songs – that is, the audience know his work and are more energised by it than the artists he samples.  I couldn’t imagine a clearer statement of acceptance.  What Gillis does is more than just playing around with sounds that connect in a cool-sounding way, though; a lot of the connections are inspired pieces of pop culture commentary, like opening with a link between The Spencer Davis Group’s ‘Gimme Some Lovin’’ and UGK’s ‘International Player’s Anthem’.  That’s getting pretty nerdy, though, and for me, after the balls-out wow factor of Night Ripper, the Girl Talk sound developed such a stronger emotional core with Feed The Animals, extracting every drop of feeling out of hundreds of songs that seem corny and passé when listened to on their own.  He’s said he won’t be doing any more album-length megamixes like this, instead focusing on creating discrete tracks, and as far as I’m concerned, he can do whatever he wants – I’ll still be first in line on release day.
Most representative track: ‘Shut the Club Down’
My favourite: ‘Give Me A Beat’ 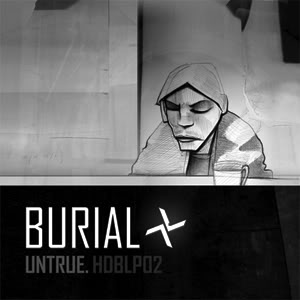 The moulded and beaten vocal samples of Burial’s music suggest a voice crying out from the darkness, leaving echoes of moments in time – maybe in the past, maybe in the future.  The words are usually imperceptible, but occasionally there’s a moment of clarity – such as during ‘Shell of Light’, on which “I wasn’t sure if we could be friends” loops over and over.  Your own optimistic or pessimistic nature may inform what you take from that, and what you hear in the fainter samples, but taken at face value these vocals sum up Burial’s uncertain aesthetic.  Even when cutting together an album as consistent and musically grounded as Untrue, he never quite seems at ease.  It’s like he’s constantly switching from looking over his shoulder to see what he’s left behind (or maybe what’s chasing him), and casting his eye as far in front of him as possible, willing something tangible out of the haze.  That said, if that’s the case, he acts as a powerful and skilled creator.  New elements seem plucked from the earth’s soil as he conjures each track and allowed to develop organically into something that just… works.  I mentioned texture(s) when writing about Dan Deacon and Four Tet earlier, and if that word is synonymous with the sounds produced by the most forward-thinking musicians of the day, Burial sits squarely at the top of the pile.  Untrue, only his second album, is his groundwork for a new generation of innovators.
Most representative track: ‘Archangel’
My favourite: ‘Raver’﻿

Filed under 'Best Of' Lists, Music