I have Fridays off, so usually that’s my day for exploration – sometimes with a companion, sometimes not. This week, I went into Ginza to meet someone for yakitori. I arrived there with two and a half hours to spare, so through thick humidity and heat, I wandered down to Hama-rikyu, known in English as the Detached Palace Gardens. That’s a reference, I believe, to the Imperial Palace twenty minutes to the north; Hama-rikyu was the emperor’s duck-hunting and tea-sipping retreat.

Begun in 1654 by the Tokugawa family and finished over a time period encompassing about 6 Shogun, then sequestered by the Emperor after the Meiji Restoration, the whole thing was destroyed last century: first by the Great Kanto Earthquake, second (and most completely) by bombing during World War II. The City of Tokyo was then given the garden by the Emperor (that strikes me as rather hollow: “Okay, everybody, we’ve enjoyed this beautiful park for hundreds of years and kept you out of it, but now that it’s decimated… here you go!”), which restored it – within about a year – to its former glory.

So, as I ambled through grassy meadows, sat contemplatively in rest houses, and admired the view from the Nakajima tea-house, the historical significance of it all was more a product of my imagination than actual, tangible evidence. However, the Japanese are exceptionally good at rebuilding things to look exactly as they would have. Some shrines were built to symbolize regeneration, so they are torn down and rebuilt brick-for-brick, board-for-board every 20 or 50 years or something. And of course, the war left a trail of destruction right across the country, so a good number of the country’s important sites are in fact copies of the real, vaporized thing. This garden, then, looked authentic enough, but the knowledge that it basically wasn’t couldn’t be pushed from my mind.

While the noise of the city and the shadows cast by its buildings cannot be completely escaped, its filthy air can. I’d almost forgotten what it feels like to inhale a lungful of fresh air, so entering this tree and grass-filled delight was like stepping out of my new life and back into my old one. I breathed deeply and felt… well, regenerated and energized afterwards. Plus there were resident cats, which always delights me (though the enormous flying insects don’t). Tokyo needs more places like this. 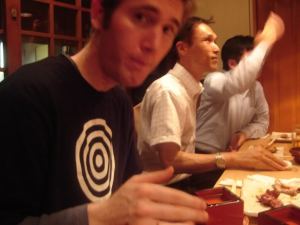 I also cannot escape New Zealand. I had a bit of free time at Yokohama the other day, so I was chilling out in the teachers’ room reading my handy guidebook (thanks again, Nic and Mami). Suddenly, I was forced to look up from the book and listen intently to the music coming from the lobby PA. Normally I would avoid doing this at all costs, as it is invariably pumping out swill like The Black Eyed Talentless Pricks or Destiny’s Satan-Child, but not this time. No, it was the dulcet tones of Bic Runga. Turns out it belonged to one of the staff members, who spent three years at high school in New Zealand, and actually lived just down the road from me in Riccarton. We probably saw each other at some point or another. This, combined with seeing my old flatmate’s picture on hundreds of Fujifilm photo-printing machines in Shinjuku, makes me think I know everyone in the known universe. Even if they don’t know me. Or prefer not to know me, since the spaghetti incident. Look, I said I was sorry and I meant it, okay?

On Thursday I met my friend Yutaka after training. (I was so excited I forgot to punch out my timecard.) He’s a tour guide in Christchurch, but has been back in Japan until tomorrow, so he offered to show me some things in Shinjuku. First, some skyscrapers. 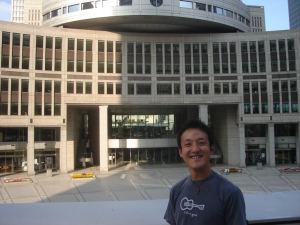 West Shinjuku is known in Tokyo as ‘the skyscraper district’. There must be somewhere between 10 and 20 buildings that are 35 stories or more. Pretty much all of them are about 80-90% offices, with supermarkets on the ground/basement floors and restaurants on the highest floors. Some of course, have observation areas, so we checked a couple out. The most impressive was the tallest building in the city, the Tokyo Metropolitan Government Buildings, with its twin towers and modern interiors.

Generally I would say a view’s a view and there’s no point explaining it, but this was special enough to warrant more than just a photo or two. In every direction, buildings cover the land (apart from the parks, like Yoyogi), all the way out past your field of vision. This means there is an obscene amount of pollution, so you can’t really see that far – like, if it was NZ, you’d probably be able to see Mount Fuji, but here you can only see it about twenty days a year. The point, though, is that one has to marvel that a lot of this sprung up in the wake of World War Two. That’s 50 years to get from near-decimation to arguably the most impressive, advanced and certainly largest metropolitan area in the world.

From there we went to an alley crammed full of very traditional yakitori bars: tiny establishments serving mostly barbecued meat on sticks to salarymen. The ‘men’ there is key, because while we there, I would’ve only seen about four or five women out of the hundreds of people dining in the alley. Every time a pair or group of young girls walked past, Yutaka would say they were probably from out of town, because local women would always go somewhere else and leave the blokes here to drink, smoke and banter. 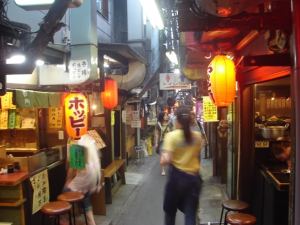 I quickly realised the art of choosing which establishment to enter. First, you want one that’s full (or nearly full) of people. If there’s nobody there, that’s usually for a good reason: the food’s inferior. Better to have to keep your elbows tucked in tight and enjoy incredible food than be able to spread out and not want to finish what’s been put in front of you. Second, the chef shouldn’t be too vocal. The vast majority will be calling out ‘Douzo’ (please), ‘Irrashaimase’ (formal welcome) and ‘Oishii desu yo’ (It’s delicious), loudly and almost desperately. The good chefs a) are too busy cooking to yell at potential patrons walking by; b) know their stuff is so good that people will come anyway.

Which brings me to the food. I… words fail me. Certainly one of the best meals I have ever had, and a dream experience. We had mung bean sprout/chicken liver salad, seasoned pork/spring onion skewers, macaroni/tuna/ham salad, tofu/pork/radish stew, seasoned chicken mince skewers (a house specialty), and seared bonito slices (just amazing), accompanied by several Asahi beers. I’ll post a photo soon, but seriously, every last thing was incredible. And we were sat right in front of the charcoal broiler, so we could watch the chef work. Everybody was friendly, too – obviously quite surprised to see a foreigner in a place like this, but keen to communicate. 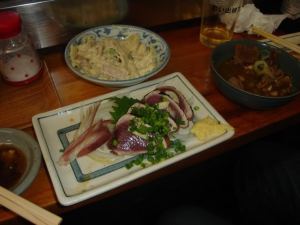 We then met an Aussie guy and a couple of American girls, so we had a few drinks with them, which was cool. I found myself talking like a teacher: smoothly and very demonstratively. Perhaps not a good thing, but I’ve resigned myself to it, because these procedures and philosophies I’m being trained in won’t allow themselves to be put to one side. Actually, maybe it is a good thing. I’ve never been very good at verbal communication, so if if the only downside of changing that is sounding like I’m in an infomercial, I guess I should embrace the trade-off. Either way, it hasn’t been that difficult thus far. Kids training next week! Singing and dancing! Woohoo!