THINK OF PEACE AND MEDITATE

Waking up around midday after a fitful sleep, I ordered in a terrifically bland Palak Paneer from the restaurant on the roof of the hotel. Nice place, with a view of the area and plants all about the place, but rubbish food and service. No matter.

When I finally ventured out into the madness that is PaharGanj, I was greeted by not less than five drug pushers in a 20-minute time period of walking up and down. “Hey man, still in Delhi?” Yes, and you don’t know me. “Yo, you smoke hash?” No. “Hey man, where you from? I can get you anything man, hash, H, E, you name it.” I’m from New Zealand, now go away. Etc. 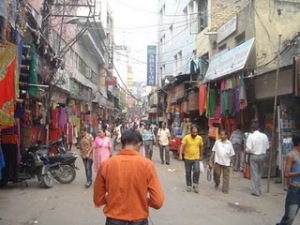 Admittedly I only spent a short time on those streets, but I felt like everyone, whether their business was legit or not, had nothing but rupees on their mind. I stopped and talked to a couple of shopkeepers, and in both cases I didn’t detect any flicker of genuine empathy in their eyes. It was all patter, all opening lines and techniques and always-be-closing, in a way that is hard not to admire because it’s so slick but puts you at such a distance from them as a person. I came to India because I’d been told it was a far more open culture than pretty much anywhere I’ve been but especially Japan; here in PaharGanj, with the dozens of sets of eyes that never smile, I felt like a true outsider, like I wasn’t really welcome.

After a few moments of embarrassing, Kit Moresby-esque mania in my hotel room (brought on by the prospect of having to stay a lot longer than 2 days here, which was looking likely but thankfully didn’t eventuate), I started to get the hang of social interactions and how to get things done. By the end of that second day, I felt like I could cope here for as long as I needed to, but it required a closing off of the more loving parts of my heart in order to remain on top of things. Several folks on the train and in Bangalore would go on to tell me that my instincts were pretty much right, that life in Delhi is quite different from most other Indian cities and that you do have to regard pretty much everything with a suspicious eye. Shame. 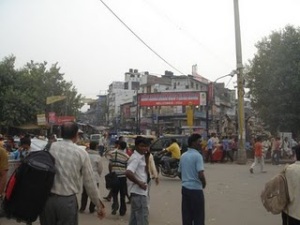 Onto the train, then, which I had been looking forward to so much. Nearly 40 hours, well over 2000km, all in a packed air-conditioned space! Ahh, this is real travel. I was lucky enough to sit with a group of men who, in various ways, were extremely friendly and open people. They asked me many questions about New Zealand, about Japan, about my purpose for being in India. I noticed in these men that they were able to be honest, genuine, completely open and friendly despite rarely offering a smile. It’s all in the eyes.

One was a Swami of the Sivananda Order, based in Ajjampura, and he very quickly saw through my happy veneer to the unease rumbling beneath. I had a lot on my mind about things I won’t detail in here, and it was written all over my face and body language, no matter how many times I extolled the virtues of being in India. “Too much feel,” he said. “I think you have too much feel. No feel, no worry.” And then, with a calming gesture of both hands lightly falling, “everything is clearing”. Again, this man rarely smiled, but he had an aura of positivity and simple calm that affected everyone around him. I asked him if he had any brothers or sisters; he replied, “No. Before I did, but now, no… you are brother. He (points to another man in the carriage) is brother. She is sister. Everyone.” He gave me his phone number and address and instructed me to come and see him. I think I will.

The hours – well, days – passed swiftly thanks to Swamiji and my other companions’ ideal attitudes. I got sick, a sickness in the bowel which has only just passed, but I didn’t care – I was experiencing India as I’d hoped I would, and that came as such a relief after that brief episode in Delhi. To Bangalore, then, and even more positive experiences to be detailed soon…

TODAY WAS A GOOD DAY

Somebody in Japan had this wonderful idea that there should be at least one public holiday every month. At the moment all that misses out is June, so this means we have wonderful holidays like Marine day and, this past Monday, Respect for the Aged Day. There’s also the Autumnal Equinox and Health and Sports day coming up in the next three weeks, so it’s all coming up sunshine and roses.

As a result, I decided to do something different and go out on Sunday. I was on the train to Shibuya, listening to Dreadzone, when an elderly couple came and sat down either side of me. Normally this wouldn’t be anything special, but the fact that chose those seats over several pairs of adjacent seats in the carriage told me I should prepare for some light conversation. Sure enough, they both leaned around and front of me and hit me with all the English they had.

Nice cellphone! Which cellphones are better, Japanese or Western? Are you from America? Is today your day off? Etc. Of course it wasn’t as grammatically correct as all that – just “today day off?”, for example – and there was plenty of Japanese vocab sprinkled in too, but I could understand and I responded to all their queries with civility. Half the people in the carriage were giggling uncontrollably to themselves; I’m sure the sight of a very tall gaijin being accosted by a typically earnest old couple was a hilarious sight.

After a while they got off, and I was able to return to my soothing, unchallenging music. Upon reaching Shibuya, I soon learned it was the day of the local matsuri. I’d never been to one of these before, so you can imagine my excitement. Teams of shouting, grunting people were carrying heavy mikoshi up and down the closed-off streets and, by the looks of things, having a lot of fun. What I’ve heard is that basically it’s one long day of drunkenness with alcohol flowing beforehand, at several stops during, and long into the night afterwards. I don’t know whether that makes hauling these things around in the brightness and heat easier, but most people seemed to be enjoying themselves.

Several hours and a bottle of shochu later, we picked up and headed off to a club called Womb. I tell ya, I never thought I’d happily pay ¥3500 (around NZ$40) just to enter a complex of darkened rooms, but there it was. It was AMAZING. There was the thumping electro/house, the laser lights glowing over the crowd, the dry ice turning people more than five feet away invisible… the atmosphere was perfect. Most of all, it really felt like everyone was there to have a good time, which gave the unusual effect of a jam-packed dancefloor filled with happy people. Unusual, because back in NZ, you couldn’t have that without the requisite pushing and shoving. Here, everyone was just glad to be in the company of about 750 like-minded people.

What’s more, being taller than pretty much anyone else in the room, I was an obvious visual focus for a lot of people. This meant that, in a very foreign experience for me, they would often follow my lead. I put my hands up, they put their hands up, and so on. I became very excited and was soon taking every opportunity to string people along, which is hilarious if you can imagine me with my lanky, unco dance moves being the leader of the pack. They all kept smiling and laughing, so I carried on until my shirt and pants were so soaked with sweat that I had to leave the dancefloor and re-hydrate.

I’m not sure I’ve ever felt so disgusting, or euphoric, in my entire life.