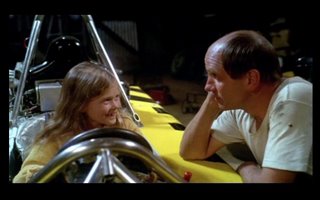 With the World Cup on, I have set little time aside for watching films. Those which I have watched – The King of Comedy and The Baxter – did not inspire me to write. Especially not The Baxter, which was boring, stupid and not funny. Thankfully, I have been stirred back into life by Smash Palace. It is the sort of film that doesn’t force itself on you, instead picking you up along with it and keeping you involved until it is over; it’s a restrained treatment of extremely sensitive and dramatic content, the sort of film I would be proud to have made.

Smash Palace concerns what happens when two people experience a strong physical attraction, know they probably aren’t right for each other but go ahead and have a kid anyway. Everything will be all right, surely. We’re okay right now, why shouldn’t we be in ten years’ time? But now their daughter is turning 10 (or so), and the attraction is buried underneath daily disagreements, which turn into arguments then violent rows. Many of us can relate to this topic in one way or another. A great number have been in relationships that just didn’t work out how we expected them to. Some have experienced a similar scenario as children.

There is nothing left to keep Al (Bruno Lawrence) and Jacqui (Anna Jemison) seeing one another – nothing, that is, except young Georgie (Greer Robson). Both have a profound love for their child that cannot be taken away, so when Jacqui leaves and takes Georgie with her, it causes massive difficulties. Al wants to see Georgie, but Jacqui feels threatened by him and wants him kept away. Desperate measures are taken by both parties. One of them goes much too far, but for us watching, is it really so unreasonable? We feel such an attachment to these characters, we really want the best for all of them, so it isn’t particularly surprising when Al picks up his shotgun and goes bush. Shocking and moving, but not surprising.

Almost any actor would fail to pull us along with Al as he behaves more and more irrationally. Bruno Lawrence, however, is no hired hand. Everything he does, whether it’s a shotgun or a spanner in his hands, feels totally grounded in reality. A few scenes of contrived, plot-oriented dialogue are delivered convincingly without breaking stride; well-written, spontaneous scenes are so perfect as to sometimes inspire tears. Jemison does very well in a part that many viewers would hate, balancing playful and tense carefully.

It’s Robson who steals the show, though. What a shame that she went on to little more than Shortland St. and Celebrity Treasure Island. At no point does it seem like she is playing anyone other than herself, which is so rare in a child actor. Usually, they either act up for the cameras (annoying) or can’t deliver their lines convincingly (distracting). Robson gets everything right. There’s a scene with Lawrence (pictured above) in which they’re tinkering with the racecar, and she asks him how he met her mother. Nothing is wrong with that scene. There is more truth in that scene than in a thousand lofty-minded American indies; whatever reservations I had about the film were put aside at this point.

Donaldson’s technique has gotten worse over the years. These days, he’s become used to being a studio director-for-hire, such that his recent, more personal projects have been maybe a little to slick for the subject matter. Back in 1981, however, he was developing confidence in his craft, and it shows. Often, his slightly wayward writing is reined in by effective, restrained, and very cinematic technique. A slow zoom here, a swift edit there – it all combines to tell the story with great economy, but without losing any of the impact. Most of all, he allows the actors to be great, so they are. In particular, the final few shots sum up the film in a way that could not be bettered.

Now that this is available on DVD with the also good but vastly inferior Sleeping Dogs, Kiwis have no excuse to not see this important film. I’d like to be able to say that we’ve gone on to make many films like Smash Palace, but really, we haven’t. Instead of producing more of these small-in-scope but wide-in-impact films, we’re more like the bulk bins aisle in the supermarket – a cheap, identical alternative to the international (American) brands. Whale Rider is as close as we’ve come in a long time, but that was let down by a slightly Hollywood ending. In My Father’s Den was excellent, but it never came close to the immediacy and spontaneity of Smash Palace. It’s a beautiful, shattering film.