Today is a holiday in Japan. Marine Day. What that means is that I and most of Japan’s employed population have the day off work, so I did what any sensible person would do: I went on a bender.

It wasn’t really my intention to do so. I mean, I wanted to celebrate – my first pay, my first paid day off work EVER, a rare chance to go out with other trainees – but I didn’t really have a plan. Sometimes, as in this case, that is best. You let yourself be led from place to place, and soak up as much of the atmosphere (and alcohol) as you can. We woke up on Sunday morning still a bit drunk from the night before, and in a moment of inspiration realized that we didn’t have to work tomorrow! We could do it all over again! And so we did.

The beer and shochu fuelled spirited conversation. I learnt a new word: majime, which can be roughly translated as ‘proper’, relating to behaving sincerely in the way you ought to be according to traditional social mores. What is its value? If sincerity is derived from obligation, doesn’t that make it insincere? Then again, if such a thing is part of the foundation of a culture, it shouldn’t be criticized just because it’s there, should it? It is important, and it’s impossible to imagine Japan without it, but for Westerners it can’t be completely understood. It’s just another thing that prevents us from truly joining this big club. 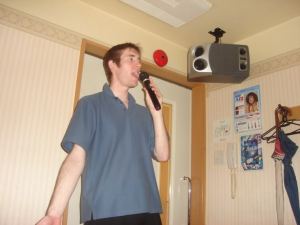 Many places have nomihoudai, all you can drink for a two hour period, which is just a wonderful way to promote sensibly paced drinking. They even have this at karaoke bars, so there’s this effect of feeling like your singing is getting better when you actually sound like the Jenkins’ greyhounds next door. Consequently I hit the wall at about 9pm on Sunday in some izakaya somewhere (they all blur together eventually) and, in no state to catch three trains home, stayed a second night at Tim and Shoko’s (thanks, guys). 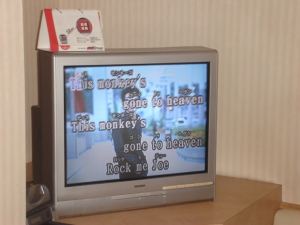 Now I’m home, I have that odd feeling of knowing I had a pretty good weekend but without much that lasts. It’s a very immediate thing, getting drunk and talking shit – it entertains for a time, then it’s gone. I met some new people, so I guess that’s what I take away from it. The opportunity for more of the same at a later date. People might say I’m too serious all the time, but they… well, they’d be right. In the words of Oscar Yesenin: I’m not care.