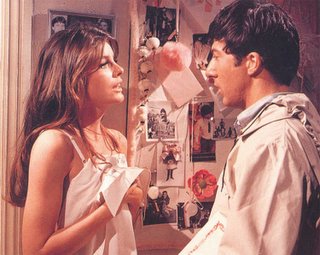 Inches away from being a grand Fail, The Graduate is the worst film I’ve seen since Doom, and the most annoying and insipid since Millions. There is so much praise out there for it – it almost always comes up in a list of great American films – but at film’s end my reaction was worse than feeling unmoved: I felt cheated. Cheated by a writer who set up an intriguing situation then pissed it away by descending into cheap fantasy, cheated by a director whose track record suggests he is incapable of producing an insufferable film, cheated by the legions of fans who led me to see what all the fuss was about.

The tagline reads: ‘This is Benjamin. He’s a little worried about his future.’ I assume that implies that the audience will be, too; I wasn’t. From the beginning I couldn’t care less, even when my current situation – (near) graduate looking for what to do next – mirrors his to a degree. Hoffman’s Benjamin Braddock is surely one of the most annoying characters in movies: his awkwardness, meant to be adorable, is frustrating. His attitude towards his parents is immature. The things he says are off-putting and often stupid; the things he does are flat-out ridiculous. This is mostly due to the scriptwriter’s (lack of) craft, but Hoffman needs to shoulder some of the blame – it could have been an interesting character, one we at first distance ourselves from but eventually come to associate with, but he did not pull that off.

What angered me most was the inconsistency. One moment Benjamin is a stuttering fool, wandering through a hotel lobby totally unsure of himself; the next he’s taking a girl to a strip club on their first date, sunglasses fixed on his face, cigarette hanging out his mouth, the supposed epitome of don’t-give-a-shit cool. Then he’s back to stuttering and awkward, then confident, and back and forth and so on for the rest of the movie. None of it makes any sense! Why would he do that, or that, or that? Why would he say such stupid things? Why wouldn’t he say such an obvious thing? I can’t understand it, or why it struck a chord with anyone.

Anne Bancroft did well in her challenging role – very well – and Katharine Ross is beautiful and wonderful right up until the inane closing minutes. Unfortunately, the story takes too many stupid turns to allow them to keep shining. And what was up with the music, man? Legendary Simon & Garfunkel score? Bullshit. It was three, or possibly four, songs repeated two or three times each, and only once – the opening credits – did they work well with the image. Next time The Sound of Silence comes on the radio, I’m going to break it, because I heard it enough times in this movie to last the rest of my life.

As for Nichols, I’m not familiar with much of his work – only Closer, which I enjoyed despite its theatricality – but I read that it almost always cuts into the deeper channels of modern society. Not this one. And his technique is particularly unsubtle – the slow zoom is used a couple of times too many, and the fast, clumsy zoom is used distractingly often. Some compositions are nice, the most obvious being the famous legs/Benjamin shot on the poster, but others beat you over the head (Benjamin sitting on a bench, alone, at Berkeley with Old Glory fluttering in the foreground sticks in the mind).

Yes, all that saves The Graduate from the lowest rating are some interesting, informing points of technique (I didn’t know Kubrick ripped it off for 2001) and some good support acting. Everything else is pointless, dated trash that may have been edgy and provocative in its time but is almost completely inconsequential now, not to mention utterly nonsensical. This is a rare film that makes me think today’s best films are better and more profoundly effective than those of previous decades – give me Eternal Sunshine, Lost In Translation or Before Sunset any day over tripe like this.