In praise of Roger Ebert 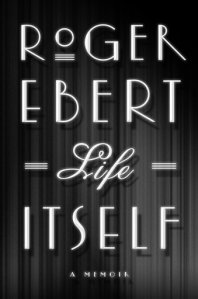 'Life Itself' by Roger Ebert, on release this week

“But now it’s getting late, which means he has his own work to do. Chaz heads off to bed. Millie, for the moment, hasn’t been seized by night terrors, and the brownstone is quiet and nearly dark. Just the lamp is lit beside his chair. He leans back. He streams Radio Caroline — the formerly pirate radio station — and he begins to write. Everything fades out but the words. They appear quickly. Perfect sentences, artful sentences, illuminating sentences come out of him at a ridiculous, enviable pace, his fingers sometimes struggling to keep up.”
-‘Roger Ebert: The Essential Man’, by Chris Jones, Esquire, March 2010

Roger Ebert, more than anyone else, is the reason why I wanted to be a writer. I think most of us have an initial reference point from whence our passions arose, like a car enthusiast’s formative obsession with the 1961 Lincoln Continental convertible or a young swimmer watching Michael Phelps sweep eight golds at the Olympics. I write because I have always written, since I was a small child, but I take my inspiration from Ebert above all others. His writing is honest, principled, informative and articulate, always entertaining, never boring.

When I first started this blog on Blogspot back in 2004, it was to practise writing film reviews, and I said in the first entry (since deleted, time wasn’t kind to those words) that I hoped I would one day be Ebert. I hadn’t actually been reading him for very long at that point – maybe a year or so at most – but he’d already become the standard to which I aspired, for reasons I’ll attempt to put into words further down the page. It was my plan to write reviews of most of the films I saw in an effort to get better at watching them, but my bigger hope was that I would at least become a better writer, if not a successful one.

Over time I’ve written less and less about film, and taken on a wide range of other writing influences. To my great surprise, it is India that has given me the inspiration, impetus and support to be a bit more successful as a writer, and not film. However, I’ve continued to read Ebert – who in fact has also written less and less about film, proportionally at least. In addition to the weekly film reviews he’s been filing regularly for over 40 years, and the other writing he’s compiled in the form of interviews, features and books, Ebert now has a blog, too. He writes on many subjects besides film, most of them aspects of his colourful life Every entry is a joy to savour. The blog was the main reason behind his winning the 2010 Webby Award for Person of the Year – not only for the quality of the blog entries he posts but also for the quality and depth in the comments he receives, which are sometimes even more fascinating than the entries themselves.

The definition of a good writer is elusive, and likely subjective. The standard of one’s readers, like the myriad folks who comment on Ebert’s blog, might be a pretty good one. But a definition that appeals to me is this: a good writer articulates thoughts in ways the reader might not have arrived at on their own. Even if they are thoughts with which the reader strongly disagrees, the writing itself can still be compelling in the hands of a vivid wordsmith. Take, for example, Arundhati Roy’s work in recent years, which can be as misguided as it is literary. On the other hand, saying what a lot of people are thinking can be even harder; one has to work the words on the page into a form that somehow impacts on a reader who agrees with them before he or she even reads them.

With Ebert, whether I completely disagree with him, completely agree or am ambivalent (I usually agree), there is always something new to discover in his words. Perhaps some film fact I never knew, or the name of a new actor to watch; most often, it is the sentences themselves that offer the greatest delight. They frequently surprise me, flicking a ‘how did he do that?’ switch in my head.

I find Ebert’s words returning to me at unexpected moments as a way of articulating what I see before me, or to offer something of value to a conversation with someone else. Ebert’s words are often so tightly formed that they sometimes seem to have always existed, like he plucked them from the sky and set them before me. And his words become part of me even as I read them.

After decades of getting those words in small chunks (though nowadays, with his blog and Twitter and Facebook etc, those chunks arrive more frequently), now we have Roger Ebert’s memoir ‘Life Itself’. Thousands upon thousands of those words, all arriving at once, and I am certain they will be just as much a joy. Thank you, Mr Ebert, for being such an inspiration.

2 responses to “In praise of Roger Ebert”